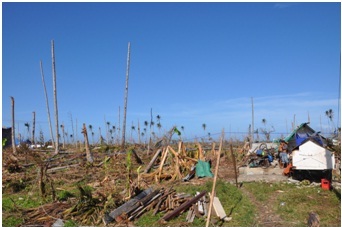 Indigenous peoples living in upland, and difficult-to-reach communities in Boston and Cateel municipalities in Davao Oriental are facing long-term food shortage and hunger if they are not able to plant fast-maturing crops by February at the latest.
At present, CARE and other organizations, such as the Department of Social Welfare and Development in partnership with the World Food Program, are meeting immediate food needs through food distribution. There is uncertainty, however, as to how long this food distribution will last. In a best-case scenario, these communities will have access to food supplies up to mid-March only.
The source of livelihood of these indigenous communities, like most of the population Davao Oriental, is growing coconut, oil palm, rubber and falcata trees in smallholder plots, or by working in plantations. All these were destroyed by typhoon Pablo, resulting in the long-term loss of livelihoods. Coconut, oil palm, rubber and falcata trees take time, no less than three years, before becoming productive again.
Indigenous peoples also plant upland rice (traditional rice variety); and vegetables such as eggplants, string beans, okra and pechay; and root crops such sweet potato and cassava. These are grown mainly for household consumption. These crops were also destroyed by typhoon Pablo.
Residents of remote and hard-to-reach barangays Aliwagwag, Malibago and Maglahus in Cateel municipality, and Simulao, Caatihan and Cawayanan in Boston municipality, mostly indigenous peoples, are subsisting on food rations. In the face of uncertainty over the long term, they are asking for support so that they are able to acquire seeds so that they can immediately start their livelihood recovery, and avert long-term food shortage.
According to the local seasonal calendar for agriculture, February is the season for planting vegetables, upland rice, and other crops. If this planting season is missed, the next planting season will be during the third quarter of the year yet. Missing the February 2013 planting season would have serious implications on the well-being of the indigenous communities in Boston and Cateel.
Support to the livelihood recovery activities of the 9,940 indigenous peoples residing in Aliwagwag, Malibago and Maglahus in Cateel municipality, and Simulao, Caatihan and Cawayanan in Boston municipality will avert long-term food shortage and hunger among these vulnerable populations. Their timely livelihood recovery can be supported by providing them seeds, including seeds of fast-maturing crops (less than three months) such as radish, mustard green, okra and eggplant in order to augment their food sources in the earliest possible time.
Tweet