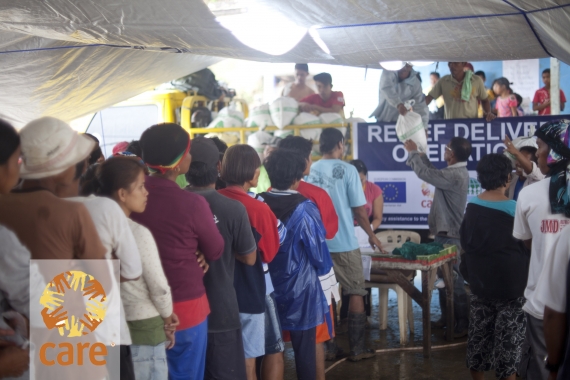 More than a month after the onslaught of Typhoon

Bopha in Mindanao, there is still $43 million or 66% funding gap from the $65 million international aid appeal for typhoon Bopha, UN OCHA reports. Furthermore, of the nearly 1 million people in need of food assistance, only 230,000 received food packs from the government and donors from local and international community.

CARE and partners ACCORD and AADC initially targeted to raise EUR500,000 to assist 25,000 persons in need of assistance coming from the most affected vulnerable households. The assistance covers food, WASH, shelter and NFI. Of the EUR500,000 target, EUR317,000 was raised through an INGO consortium project supported by ECHO.

To further reach the financing target, a three-month long fundraiser campaign was launched by CARE Nederland, CARE France, ACCORD and AXA and has so far raised EUR3728 through online donations. Cash donations of yet undetermined amount have been collected by AXA Hongkong, for turnover to ACCORD, while AXA Philippines has also launched a separate fundraising activity. TORM Shipping company, meanwhile, also contributed US$6852 to ACCORD.

To date, CARE has distributed food packs to around 10,000 persons in barangays Aliwagwag, Maglahus and Malibago in Montevista, Compostela Valley and barangays Canidkid, New Dalaguete and Camantangan in Cateel, Davao Oriental.  The food packs, which will be distributed in two tranches, can help sustain a family’s basic dietary requirement for two weeks. Food distribution will benefit residents of three barangays in Boston municipality this week. CARE will also distribute cleaning and clearing kits and shelter assistance which will start on the third week of January.

Typhoon Bopha is the most powerful typhoon that hit the Philippines in 2012. It has affected at least 6.2 million people, leaving 1,067 in the official death toll and 834 in the missing list.

*For more information about the Typhoon Bopha fundraiser campaign, visit this link.