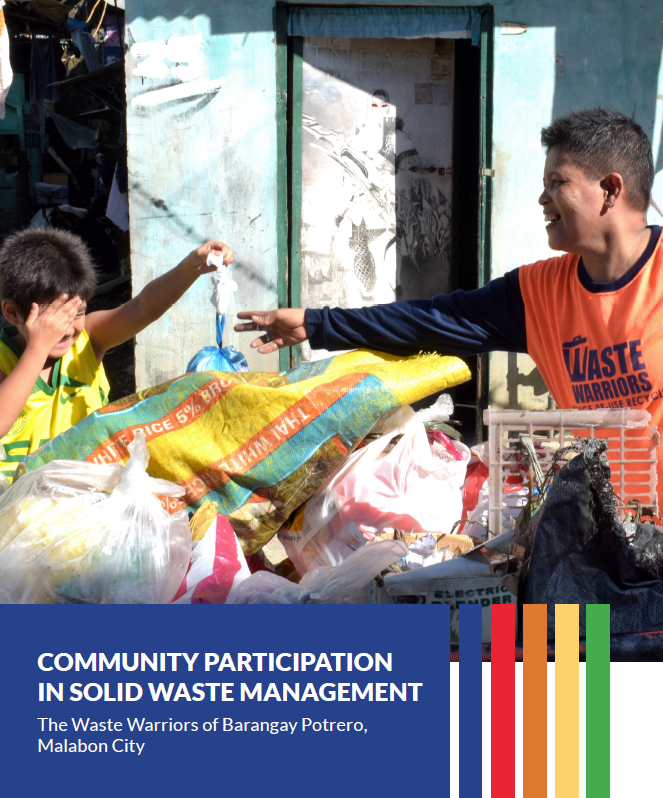 As populations grow, so will the amount of waste. Proper solid waste management (SWM), thus, is an urgent undertaking.

This is a critical issue in disaster-prone countries like the Philippines – ranked third most at-risk to disasters in the 2018 World Risk Index – and where poverty levels are high. This is because ecosystem degradation and disasters disproportionately affect the poor. They will also bear the brunt of climate change impacts, which may be aggravated by increased greenhouse gas emissions brought about by improper disposal of waste. In the context of waste management, they are “often unserved or have little influence on the waste being disposed of formally or informally near their homes” (World Bank, 2018). Many also work in the informal waste sector, relying on meager, volatile incomes and exposed to unsafe working conditions.

However, urban poor communities and informal settler families are typically characterized as polluters and waste generators, citing their tendency to buy products in sachets, i.e., in smaller, cheaper quantities. These claims are made despite the fact that, around the world, consumption patterns point to higher spending capacity being positively correlated with higher waste generation. Still, they are usually seen as part of the problem. This study argues that they are also a vital part of the solution.

By presenting the good practices of Barangay Potrero in the area of SWM, as embodied by the Waste Warriors, this study highlights how engaging, capacitating, and mobilizing local communities to participate in SWM benefits the environment, the individuals, and the community as a whole.

This study found that several interrelated factors contributed to the success of Barangay Potrero’s SWM:

1) Their noteworthy SWM practice is a good illustration of what concerted, well-coordinated action between the government, civil society organizations, and communities can achieve. Because there was proper coordination, the process of managing the barangay’s solid waste became more efficient.

2) It shows that strong LGU support and prioritization is an important factor in the success of any program.

3) It highlights how enabling community participation in SWM creates a sense of ownership among community members, which in turn contributes to the sustainability of SWM programs and lets the barangay widen its reach as community members become advocates for proper SWM themselves.

4) It not only leads to improvements in environmental conditions but also improves the livelihoods and social positions of communities who have traditionally been excluded from formal programs and processes. This, in turn, makes their community a more just, inclusive, and resilient one overall.

Barangay Potrero’s approach is consistent with the principles of Integrated Risk Management (IRM). Because IRM stresses that people are a vital part of ecosystems, protecting the environment must also mean protecting people. In the area of SWM, as the case of Barangay Potrero shows, this could mean tapping and enriching local capacities and allowing for the formal participation of the most vulnerable. This not only ensures the protection of the environment but also increases the resilience of the community members individually and their community as a whole.