Potrero gearing up to be DRR model 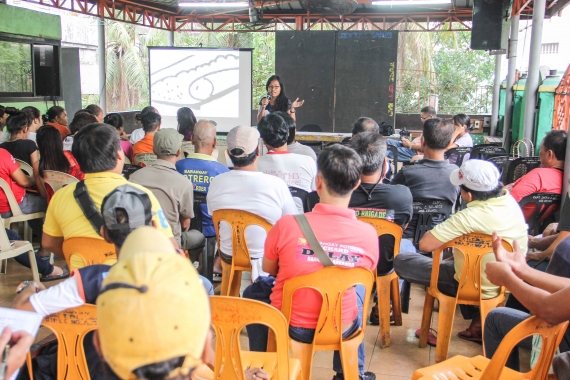 Barangay Potrero, the city’s largest barangay by area, is looking to become a model for urban, Community-Based Disaster Risk Management (CBDRM). It will conduct a flood evacuation drill on June 7 (Saturday), in partnership with Assistance and Cooperation for Community Resilience and Development (ACCORD) and CARE Nederland through the Partners for Resilience: Climate-proof Disaster Risk Reduction Programme (PfR Programme). The drill is a milestone in the process that the barangay has embarked on to achieve resilience.

Around 2,000 residents from the barangay’s most vulnerable and low-lying sitios along Tullahan River will participate in the activity. The drill will test the effectiveness of Barangay Potrero’s Contingency Plan. The contingency plan is one of the outputs of the series of disaster preparedness training activities that community leaders and members undertook. The contingency plan identified their worst case scenario initially based on what residents of the hardest-hit areas experienced during Typhoon Ondoy (international name Ketsana) in 2009 and monsoon rains in 2012 and 2013: six to ten-feet deep floodwaters.

Barangay Captain Sheryl Nolasco said that they revised their contingency plan in the aftermath of Yolanda (international name Haiyan) to “take into account the possibility of winds as strong as those brought by the super typhoon” (speeds of up to 315 km/hr). They also took into consideration rainfall projections from the Philippine Atmospheric, Geophysical and Astronomical Services Administration (PAGASA) that more Ondoy-like scenarios are expected in the future. The barangay also analyzed the resources they currently have and what gaps remain in dealing with their worst-case scenario. They also developed risk maps and evacuation plans to inform the actions of the people during emergencies.

To ensure that this plan is implemented effectively, the barangay also improved on the tasking of the barangay disaster risk reduction committee (BDRRMC). Under Republic Act 10121, or the Philippine Disaster Risk Reduction and Management (DRRM) Act of 2010, local government units like Barangay Potrero are expected to lead in disaster preparedness, response and recovery. Marieta Alcid, ACCORD’s Executive Director, credits the law for “helping reorient the focus to preparing beforehand for disasters instead of merely responding once they happen.”

Alcid also notes that “the impact of disasters on communities is based on how vulnerable they are, if they are mostly poor with no fixed livelihoods, are located in high-risk areas, lack proper education on risks, etc.” ACCORD’s PfR Programme aims to reduce the impact of natural hazards on vulnerable communities by applying the principles of CBDRM and the innovative approach they pioneered: ecosystem-based disaster risk reduction and climate change adaptation (DRR-CCA-EMR).

CBDRM, as defined in RA 10121, is a process “in which at risk communities are actively engaged in the identification, analysis, treatment, monitoring and evaluation of disaster risks in order to reduce their vulnerabilities and enhance their capacities, and where the people are at the heart of decision-making and implementation of disaster risk reduction and management activities.” Alcid links it to DRR-CCA-EMR, which recognizes that “the occurrence of more frequent and severe extreme natural events, combined with environmental degradation and climate change, aggravate the vulnerability of communities.”

Since 2011, ACCORD has ensured that its activities in Barangay Potrero try to address the vulnerabilities of the people by empowering them to actively participate in strengthening their resilience. Nolasco remembers, “We have had lots of trainings and workshops: risk assessment, disaster preparedness, contingency planning, project cycle management, even school earthquake drills and workshops for our public school teachers.” Alcid adds, “This way, we capitalize on local knowledge and expertise while making the people feel that they have a stake in what we are doing.”

The coming flood drill is just a culmination of the long process of building community resilience. It is a “practice session” so that the people and officials in the barangay will know what to do during actual emergencies. This is important, according to Nolasco, because “Potrero has the highest number of people at risk in Malabon, and this drill will cover those high-risk sitios.” She adds that their barangay has been “very much involved in all aspects of the drill preparations and will not just merely show up the day itself.”

Alcid notes that for ACCORD, this drill is different from others they have conducted before. “ACCORD has partnered with the municipalities of Calabanga (Camarines Sur), Maragusan (Compostela Valley) and St. Bernard (Southern Leyte) for drills and other disaster risk reduction activities before. The best practices of these municipalities, which have since won National Gawad Kalasag awards, were in rural settings. We are looking forward to learning a lot from the experiences of urban Potrero and sharing it with other communities, here and abroad,” she says.

Nolasco said that she is not rattled by the seeming importance attached to this drill. “We are just happy that we are now preparing for emergencies, and that our families will be safer.”