Traditional 'Resilience' not enough in dealing with calamities 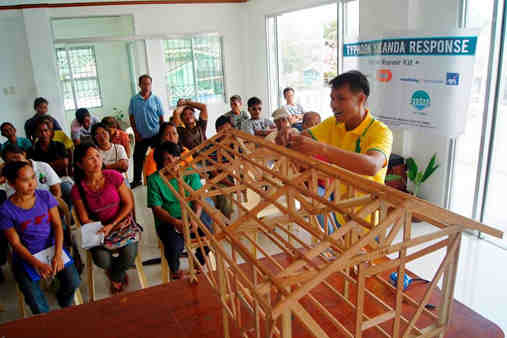 Biggest gaps
If there is one thing that survivors and benefactors seem to agree on, it is that more has to be done — there is a lack of shelter and livelihood in many places, and aid for special cases such as the disabled and psychologically disordered are difficult to obtain.
Fara Gamalo of Tacloban shared that it has been difficult for her to get support for her husband, who suffered a stroke a week before Yolanda hit.
''Walang tumutulong sa asawa ko, sa gamot. Kapatid niya ang tumutulong. Sila ang sumasagot sa gamutan, sa finance,” she said, adding that while there are special loans and grants for entrepreneurs, there does not seem to be anyone offering financial aid for those who need to buy medicine and pay for therapy for their sick family members.
Genive Aumentado, who currently resides in a tent city in Palo, Leyte, also said she is unable to provide therapy for her son, who social workers said has autism, and was traumatized by Yolanda, as it is expensive.
“May autism siya, ADHD. May trauma din siya. Nalaman ko lang iyon dito sa tent city. Pinapa-therapy pero hindi ko kaya kasi P1,500 ang consultation. Naghahanap ako ng mag-sponsor sa kanya [para makapagpa-therapy siya. Walang inooffer dito na tulong. Hindi kami naka-appeal doon sa Maynila,” she said.
Rooijackers meanwhile said that while they are doing livelihood programs, as are other NGOs, livelihood and shelter remain “the biggest gaps of them all”.
In addition, he said, for the recovery to keep going, they have to stimulate the economy. “If consumers don’t have any money, then the producers cannot also sell a lot so that’s the circle we’re trying to restore.”
Ready for action
Odessa Echavez of Victory island said that what their community needs is to transfer to a different place. “Iyong kailangan lang po namin, kahit sa isla namin, malilipatan talaga namin,” she said, expressing little faith that any kind of preparation on their island would ensure their survival, as it is surrounded by water.
''Wala na sa aming mapapag-bakwitan.''
However, NGOs said that it is still important to focus on disaster preparedness.
Rooijackers said that this could start as early as possible, when children are taught how to prepare for calamities in school. Thus, they are coordinating with teachers and the Department of Education regarding evacuation plans and what should be done in case there is a typhoon.
“At least we must reduce the impact of a typhoon that’s why we need at least three years to work on the recovery, but also to work on the resilience for the next so that the impact is less,” he said.
This was echoed by Alcid, who emphasized the importance of enhancing Filipino resilience by giving them the knowledge and facilities to weather storms and other natural disasters in the future such as triggering smarter farming techniques to allow food supply to remain stable during calamities.
''Investment ang preparedness. Tiya-tiyagain mo para maintindihan ng mga tao. Kahit generally capable ang mga tao, resilient ang sinasabi, hindi dahil tamad siya, hindi minsan maipag-kasya ang ibinibigay [na pera o resources],'' Alcid said.
However, Rooijackers added that support from donors, especially Filipinos abroad, was “terrific”, and they were able to raise substantial funds and create programs.
“The challenge is gonna be, after this weekend, we would like to urge the public and private to keep committed to the recovery of the Visayas region. There is more work to be done, and more resources needed to sustain the recovery and make sure that everybody is back or better,” he said.
In photo: Carpenters train in how to Build Back Safer homes in Malinao, Aklan
Tweet