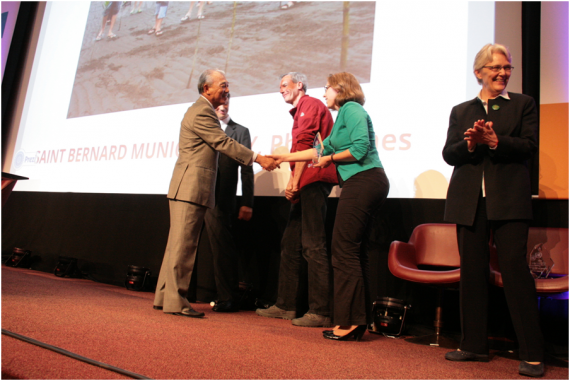 UNISDR has honoured Saint Bernard municipality, Southern Leyte, with a citation of Merit during the 2013 UN Sasakawa Award for Disaster Risk Reduction ceremonies held last 22 May 2013 in Geneva, Switzerland. The municipality was awarded for its dedication to build its disaster risk reduction capacities. A traumatic landslide completely buried a whole village and claimed more than a thousand of lives in 2006.
In presenting the citation, the Jury of the Sasakawa Award noted in Saint Bernard municipality that “despite modest means, a great dedication to capacity building, protection and preparedness is observed. This is an example of how response to an external input could generate successful consequences. Saint Bernard is a fourth-class municipality. Under the theme “Acting As One”, the biennial UN Sasakawa Award for DRR recognizes excellence in reducing disaster risk for a safer, more sustainable world.
Another Merit award was given to the Karlstad municipality and the Swedish Civil Contigencies Agency, while a Letter of Distinction was handed to Tehran Disaster Management and Mitigation Organization (TDMMO). The top Sasakawa Award was shared between Belo Horizonte City, Brazil, and National Alliance for Risk Reduction and Response Initiative (NARRI) from Bangladesh.
The five awardees were selected from 10 cities and municipalities, four individuals and 14 institutions and projects which were nominated for the 2013 Awards.  Aside from Saint Bernard, the other nominees from the Philippines are Butuan City, Philippine Senate Committee on Climate Change, and SM Supermalls. Saint Bernard was nominated to the Sasakawa Awards by Deutsche Gesellschaft für Internationale Zusammenarbeit (GIZ) and the Assistance and Cooperation for Community Resilience and Development (ACCORD).
St. Bernard Municipality’s local chief executive, Rico Rentuza, attributes the success of DRR initiatives in the municipality to its partnership with various organisations, and emphasized that it takes a continuing collective undertaking for high-risk communities like St. Bernard to build their capacities to be more resilient and safe.
“The increased level of preparedness and risk reduction can be due to our long-standing partnerships with CARE Nederland and its local partner, ACCORD, who helped us design and implement a long-term community-based DRR program, and the support of ECHO, the European Commission’s Humanitarian Aid Agency.  The disaster preparedness program of ECHO, DIPECHO, supported us for 3 cycles until we were able to integrate DRR in our long-term planning process, “Rentuza said.
He also added that the municipality’s DRR program is complemented by specific components like GIZ’s early warning system, and resettlement and relocation support by PRC, JICA, Habitat, and Gawad Kalinga.  The Philippine Institute of Volcanology and Seismology, the Philippine Atmospheric, Geophysical and Astronomical Services Administration and the Mines and Geosciences Bureau provided scientific inputs on risk assessment. The Department of Interior and Local Government has contributed to the municipality’s efforts to mainstream DRR in local development planning, and the National Disaster Risk Reduction and Management Council has motivated them to persevere in improving the quality of their work. Since 2008, the municipality has been recognized through the Gawad Kalasag Award, for its excellence in DRR.
Rentuza concluded that, “The people and the local government of Saint Bernard are most honoured to receive this very important award. Receiving this most prestigious award is the next best thing, the “icing on the cake,” to knowing that with the help of others, we have transformed ourselves into a more resilient and safer community.”
Tweet