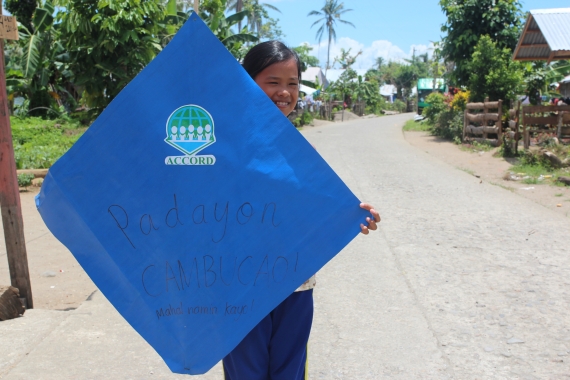 “We are like kites,” said Analita Garcela, the female barangay captain of Cambucao in the municipality of Tabon-Tabon, Leyte. She further explained that “we needed someone to throw us up so we can get out of the depressing situation we were in and start again.”

After Typhoon Yolanda wreaked devastation on their village, the future felt bleak for the people — their houses and sources of income and livelihood were all destroyed. A few days after Yolanda, Garcela shared that they decided to stock heavily on rice, fearing that another typhoon was coming.

They could not think of anything else but survival at that point.

“The people are hopeless, homeless and have nowhere else to go,” Garcela added. She observed that her neighbors were seemingly stunned and unable to move. She noticedthat “no one is willing to move forward and find greener pastures. Everyone was just waiting for help.”

Cherry Cainong, a single mother who takes care of two children aged ten and eleven, felt that things were not under her control and that she was powerless to do anything about it. “I did not know where to get the things we need right after the typhoon,” she said.

Luzviminda Dela Cruz, pregnant and feeding six dependents, said that they used to have a small vegetable garden for sustenance. But after the typhoon hit them, they lost everything but their lives.

“I was very afraid during the onslaught of the typhoon. I am pregnant and overwhelmed by the fear of miscarriage,” Dela Cruz said, adding that all of their clothes were soaked in rainwater.They did not eat anything that day while struggling to survivethe howling winds and non-stop rains.

After the typhoon, Dela Cruz mentioned that they rushedto put up makeshift shelters using scattered rubble and indigenous materials like nipa and bagacay. Even if they were hastily made, she expressed happiness with what they had, saying that “It is a lot better than finding comfort under a mango tree.”

Assistance and Cooperation for Community Resilience and Development Inc (ACCORD)was one of the first organizations on the ground after Yolanda struck. ACCORD was there to provide emergency relief assistance so the affected people can meet their immediate needs. Moreover, ACCORD did not only provide access to needed relief assistance but also helped affected people to start rebuilding their lives. It provided trainings on Building Back Safer (BBS) shelter reconstruction techniques that will make the houses stronger & safer.

Upon assessment of the situation in Barangay Cambucao, ACCORD identified the community as one of the priority villages to receive shelter repair kitsto help them protect themselves from the cold and rains.. Shelter repair materials were given to 52 households that totaled to 232 individuals, which includes 110 women and 29 young children and infants. ACCORD, in partnership with CARE, an international humanitarian organization, was able reach as much as 20,000 households or around 100,000 individuals that were affected by the typhoon in Leyte through its emergency response.

“Before, we were hopeless and in despair. The shelter repair materials that were provided to us gave us the chance to try and live normally again,” Cainong said, adding that a livelihood program for them would also be a great help.

She expressed happiness that her children now have a place to feel secure once again, saying that “It’s a great help especially to us poor people.”

For Garcela, she believes that the people in their community have become stronger after Yolanda. “We now have our own initiatives in surviving the hardships, thanks to all who helped.”

Cainong said that she is looking forward to a brighter future where they can enough food to eat in a day, and send her children to school with enough support.

Dela Cruz has the same aspirations for her children – shewants to see them in school. Her 11-year old daughter, Mae Ann, could only say, “Thank you for everything.”

Garcela thought that it would be impossible to bring back their old lives before Yolanda. But she now happily shares her new conviction: “We were like kites. Your help has provided us a chance to take off so we can soar high.”

ACCORD’s interventions in Tabon-Tabon, as well as in the other Leyte municipalities of Dagami, Pastrana, Tolosa and La Paz, have been made possible through the support of the Canadian Department of Foreign Affairs, Trade and Development (DFATD).