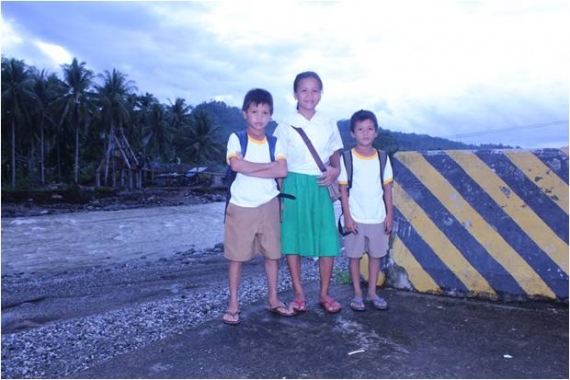 Johari Cali is a playful boy with a shy smile. He is a Grade 4 pupil at the Mandulog Elementary School. He lives in Purok 21 of barangay Mandulog. Purok 21, together with Purok 18 and Purok 22, are separated from the rest of the barangay by Bayug River.

Along with the other children in the community, Bayug River is Joharis’s playground. The river serves as their bathing place where they can swim until sun down. It is also in this river they get water for washing and drinking. Often, Joharis helps in household responsibilities by drawing water from the river. For Joharis, his family, and neighbours, the river is everything.

Joharis’s family’s house is located just beside the old Pigsu-otan concrete bridge. This bridge connects the three puroks of Mandulog, as well as barangay Lanipao, Dulag and Kalilangan to the rest of Mandulog and Iligan City. Along with his other siblings, they walk for over a kilometre everyday in going to school. “My mother is very insistent that we never miss school. She would always tell us that it is hard if we are not educated. Better opportunities would rarely come way and would even by discriminated because of lack of education. My mother would say that education is the only gift I could give to us her children,” relates Joharis in the Maranao language. Arlene, or Inday to her neighbours, herself did not finish elementary grades.

In the night of 17 December 2011, 2011 the river that used to be the children’s playground and the source of life to the community claimed many lives and destroyed a large amount of property in Joharis’s community. Joharis’s eyes still widen as he recalls what he witnessed: “that night, the river widened, overflowing its banks. The current was so strong. I have never seen the river so angry. Our neighbours were in panic as they sought refuge in our house.

Eventually, Joharis’s family had also to abandon its house. His Nanay Inday courageously gathered all her seven children and transferred to another house for safety. Keeping her children intact was all she could do as she heard the river’s strong current away the concrete bridge that connects them to the outside world.

The young Johari together with his parents and siblings immediately started rebuilding their lives after the storm. They were among the lucky ones whose houses were not carried away by the deadly floods. But Swaib, Joharis’s father remained depressed for the coconuts that he was about to harvest were either washed away by the flood, or the flowers and nuts were blown away by the strong wind. For a time, the family experienced hunger. “We had only porridge and root crops,” reveals Joharis. Help that came is like a blessing that Allah delivers to them. Trying to go back to their normal lives, Johari continued going to school when it reopened. However, it was very difficult because since the concrete bridge that they used to cross was washed away by the floods, Johari and his siblings had to use a makeshift bamboo raft to cross the river in order to go to school. Her mother feared that accidents might happen, but could not do anything since there is no other way for the children to go to school except to take the raft. During rainy days, when the river is swollen, Joharis’s mother would not let the children go to school. Thus, most of the time the children were absent. “My mother would not allow us to go to school when the river is swollen and the current is very strong. I also feel afraid at times, Johari relates. “I have stopped wearing my shoes in going to school. It gets wet during the ride on the raft. I also wrapped my books and notebooks in plastic bags so that they will not get wet should it rain or the raft capsize when the current is strong.”

On the way home from school Joharis and his siblings would always stop for a while and watch adult members of the community build a footbridge across Bayug River. They were overjoyed when the footbridge could already be used. Even if work on the bridge was not yet completed, with some community members still doing some paintwork, they were already allowed to use the bridge. Asked what the footbridge meant to him, Joharis said: “We no longer have to be absent from school when it rains hard. We no longer fear that the river’s strong currents would carry us away. My books and notebooks will no longer get wet. Now I can wear again my shoes to school.”

There joy in Joharis’s eyes as he crosses back and forth the footbridge along with the other children, tugging with them their toy carts. Perhaps, crossing the bridge of hope somehow eases the sad memory brought by the storm. Now according to Johari, he can go to school running and he can now wear his shoes to school. And walks to school with a smile.

The footbridge was constructed through the Washi emergency response project funded by the European Commission Humanitarian Aid department.