The bridge of resilience 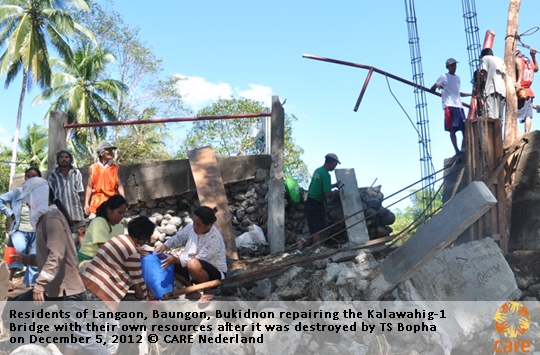 I did not expect the sight that greeted us when we reached barangay Langaon. Men and women, including some elderly were repairing the hanging bridge known as Kalawahig-1. Some were erecting two concrete posts where steel cables of the bridge will be re-anchored. Some were replacing the wooden planks. Some were gathering rocks from the riverbed and piling them into an embankment that will strengthen the bridge’s foundation. Two days ago, we were informed that the bridge was washed out by a flashflood spawned by typhoon Pablo (Bopha).
Typhoon Sendong (Washi) damaged the Kalawahig-1 suspension bridge that connects barangay Langaon to “the outside world.” The bridge was in a state of disrepair prior to Sendong, in the first place. The flooring is made of bamboo. The sides are unprotected and anybody, but most especially children, could easily fall into the river. The bridge was in urgent need of repair as the community could not bring their farm produce to the market, could not safely access relief assistance and basic services, and could not bring in basic commodities.
In March 2012, CARE worked with the community to undertake minor repair of the bridge, as part of the cash-for-work activity. Cyclone wires were installed on the sides of the bridge to prevent people from falling into the river. Rotting bamboo were replaced to strengthen the flooring. Community members were jubilant, feeling safer as they cross the bridge everyday, to go to the market, and in general to do business with the outside world.
A follow-up CARE emergency response project provided another opportunity to further strengthen the bridge. Building on the initiative of a local NGO, Green Mindanao, which constructed a concrete foundation for a new bridge. CARE provided thick steel cables, wooden planks, cyclone wire, nuts and bolts, and other materials to complete the bridge through another cash-for-work activity. In August 2012, the new bridge was completed. I visited Langaon on 24 November 2012 and saw not only people crossing the bridge but even motorbikes laden with produce. The bridge was affording people safe access to goods and basic services. It was also encouraging people to increase agricultural production and livelihood activities as the people can now safely transport farm inputs and farm produce.
On 5 December 2012, I was informed that barangay Langaon lost its hanging bridge to a big flashflood triggered by typhoon Pablo. The news was very difficult to accept. According to Langaon residents, Ugiaban Bridge one kilometer upstream got clogged and formed a temporary dam. When this temporary dam burst, it unleashed a huge wall of water that reached up to the Kalawahig-1’s flooring. They residents of Langaon watched helplessly as a huge wall of water washed away their bridge. The Kalawahig-1 was built substantially higher than the original precisely to prevent it from being overtopped by floodwaters.
The Langaon community was able to retrieve all the bridge’s materials – the steel cables, the wooden planks, the nuts and bolts, the cyclone wires. With their meager resources, and without waiting for external assistance, the community started rebuilding their bridge. We were talking with some community members when Barangay Chair Martin Tanio arrived, bringing with him perhaps two kilograms of tie wire. I did not ask, but I had a very strong suspicion that it was the most that they could afford, having earlier bought already a few bags of cement, and a few pieces steel reinforcement bars.
Kalawahig-1 was built through a project partnership amongst CARE, ACCORD and RMP, with funding support from the European Commission Humanitarian Aid and Civil Protection department (ECHO), AXA Philippines and Metrobank Foundation. Barangay Langaon is in Baungon municipality, Bukidnon province.
Driving back to Cagayan de Oro, my colleague Athena was saying that we were not mistaken sticking it out with the people and the leaders of Langaon. Langaon demonstrates the indomitable spirit of the poor and vulnerable, who aspire to make their communities more resilient.
Celso Dulce Jr. is CARE Nederland’s DRR Adviser and Representative to the Philippines.
For more photos, please follow this link.
Tweet