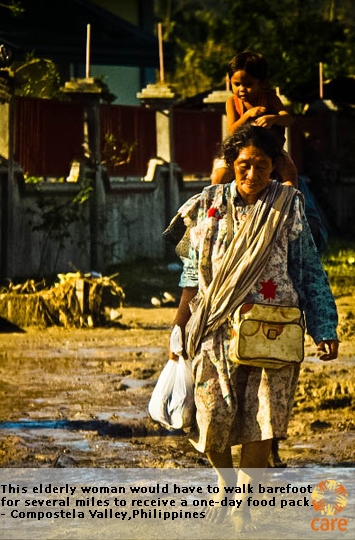 A picture of children and women begging at the roadside calls not for despair but for more aggressive and urgent help from the government, aid organizations, concerned citizens, and the people in general. Clearly, a lot still has to be done, and the needs are outweighing the capacities of the people devastated at this point.

TS Bopha, locally known as Pablo, landed on the East coast of Mindanao, the Southern part of the Philippines on Dec. 4, 201with maximum sustained winds of 175 kilometers per hour (kph), and gustiness of up to 210 kph.

TS Bopha, the 16th and now the most destructive typhoon that hit the Philippines in 2012, distressed almost 5.4 million people in a span of not less than one week.  Within three days, TS Bopha struck from Davao Oriental crossing several other municipalities in Mindanao, Negros Oriental and Palawan.

The Philippines’ National Disaster Risk Reduction and Management Council (NDRRMC) reported that 487,364 families, or 5,412,140 people, in 38 cities and 30 provinces in nine regions were affected by the typhoon. The NDRRMC said that it damaged 114,583 houses, sending 308,110 people to evacuation centers.

The Department of Social Welfare and Development (DSWD) defined the severely affected areas are the Municipalities of Cateel, Boston, and Baganga in Davao Oriental; Loreto, Veruela, and Bunawan in Agusan Del Sur; and Monkayo, Monte Vista, Compostela, New Bataan, Mabini Alicia, and Laak in Compostela Valley.

Immediate needs include food, water supply, sanitation and hygiene (WASH), medicines, shelter and non-food items, and health services. Government is responding to the situation through retrieval operations, rehabilitating lifelines such as electricity and water supply, and delivery of other humanitarian assistance, but government resources and capacity especially at the local level is clearly not adequate.

Despite relief operations from different local and international organizations, people have started to beg on the streets, waiting for whatever motorists and passersby may give them, for them to survive the increasing hunger and sickness in the entire devastated region. Clearly, more urgent and aggressive efforts from various sectors must be directed to stem the tide.

Many people have started to beg on the streets for survival, waiting for whatever motorists and passersby may give them. Clearly, more urgent and aggressive efforts from various sectors must be directed to stem the tide.

A line from the song the International Artist and activist Sting in his Sunday Concert in Manila dedicated to the victims of Bopha goes, “Tomorrow’s rain will wash the stains away, but something in our minds will always stay” is a reminder to the people not only in the Philippines but worldwide. Like other disasters, Typhoon Pablo definitely left a mark on the Philippines and a lesson to Filipinos.  Everyone should be better prepared for hazards and be capable to lessen their impacts.  After the emergency responses, an enormous task lies ahead of rehabilitation, repair and rebuilding lives towards a more resilient one.