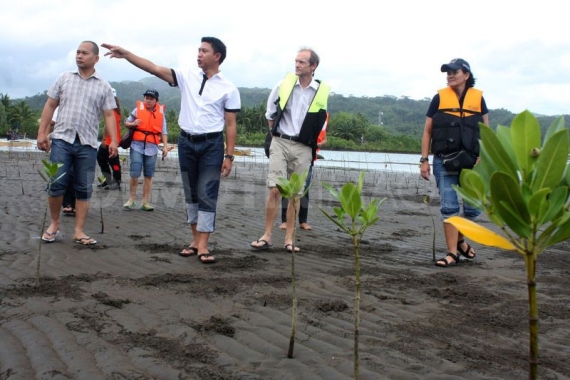 The February 2006 landslide in Saint Bernard, Southern Leyte claimed the lives of more than a thousand people, destroyed livelihoods and wiped out an entire village off the map. Six years later, Saint Bernard, a fourth class municipality, has rebuilt itself as a model of resilience.They did so by building capacities in managing disasters through different risk reduction initiatives supported by different partners including the European Commission Humanitarian Aid and Civil Protection department (ECHO), CARE Nederland and its local partner ACCORD.

It is against this backdrop that the recently concluded two day National Conference on Effective Disaster Risk Reduction and Climate Change Adaptation Practices was launched, organized by the Saint Bernard LGU in collaboration with ECHO, the Office of Senator Loren Legarda, CARE Nederland, German Development Cooperation, Region VIII Disaster Risk Reduction and Management Council, and the Asia-Pacific Institute for Green Development. The event attended by one hundred sixty-six participants, consist of various local government units, NGOs and local leaders all over the country but mostly from Region 8 to share experiences and lesson learnt.

St. Bernard Mayor Rico Rentuza in his keynote address said “Name all the hazards and we have it here” before proceeding to tell the story of his town from the time a landslide killed around a thousand people and where the survivors picked up the pieces, and eventually incorporating disaster risk reduction and climate change adaptation in their development plans.

An exhibit of related projects, trainings and other events were on show during the conference where participants expanded their knowledge on the subject of effective DRR and CCA practices. Site visits conducted prior to the conference in particular were helpful in getting a tangible picture of risk and adaptation that also incorporates ecosystem management factors. Visiting the mangrove plantation in Saint Bernard showcased one of CARE’s completed projects that link risk reduction and climate change adaptation to resilient livelihoods.

EU Ambassador Guy Ledoux, who delivered the keynote address in the conference, has cited the positive gains in disaster risk reduction programmes in Leyte and has commended the collaborative efforts of the local government units, NGOs and the communities to help save lives and to lessen damages in times of disasters.

Celso Dulce, CARE Nederland DRR Advisor, for his part attributed the success of Saint Bernard to the readiness of various stakeholders to work together in supporting high-risk communities and the municipal LGU. The Philippine Institute of Volcanology and Seismology, the meteorological agency PAGASA, the Department of Agriculture, PLAN International,Christian Aid, Corporate Network for Disaster Response and GIZin particular have been singled out by Dulce as having collaborated closely with CARE and ACCORD in developing the risk reduction capacities of Saint Bernard.

As a two time Gawad Kalasag awardee, a national award giving body for LGUs with disaster risk reduction and humanitarian assistance best practices, Saint Bernard is looking to add a third this year, already chosen as the regional winner, and with it claim a place in the Gawad Kalasag Hall of Fame. The participants of the conference, some of them regional winners themselves can only look up to the Saint Bernard experience and are looking forward to replicate similar initiatives.